Greg Poulos was an extraordinary blues guitarist who devoted his entire life to music. Over the years, Greg traveled the world and played with the best of the best, among them Freddie King and The Allman Brothers Band. He loved playing on the Florida Suncoast and for many years has been the lead guitar player for one of the area’s local bands, Kettle of Fish. He has also played with Rock Bottom, Sarasota Slim, Chris Anderson, Dan Electro and the Silvertones, Pat Ramsey, The Billy Rice Band, The Venturas, Damon Fowler, and too many others to mention.

Greg Poulos passed away on April 29th, 2022, at the age of 70, in his hometown of Sarasota, FL. Greg is survived by his two children, Sarah Poulos Bikos of Sarasota, FL, and Gregory Nicholas Poulos of Richmond, VA, his sister, Niki Poulos Joyce of Tallahassee, FL, his brother Richard “Dick” Poulos of Bradenton, FL, and his girlfriend Cynthia Caroline, of Bokeelia, FL.

His kindness and talent touched everyone he encountered. A local legend, the sounds of Greg Poulos are famous here in Sarasota, but his kind nature was memorable as well. He loved sharing his passion for music with others, especially when it came to giving guitar lessons to kids. Nothing made him more proud than watching a former student grow up to become an incredible musician.

Those who wish to make donations in Greg’s name can do so through the Greg Poulos Music Legacy Fund. 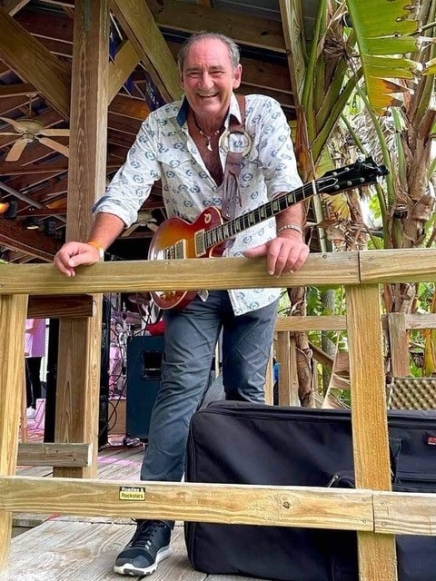 To ensure that Greg’s passion for giving guitar lessons to kids in the community lives on by providing students with music lessons and/or musical instruments through their local schools in Sarasota, Florida.